There is a lot to like about Ljubljana. Taking the divided highway, it is an easy 100km drive from Trieste. What is annoying to all Triestini is that you have to buy the “vignetta” to use the highway – a steep 30 Euros.   There is a ring road that surrounds the city so it was very easy to find the right exit and make our way to a parking lot located an easy walk to the historic city centre.

As soon as you start walking, you feel right away that the town is active and alive. Perhaps because a bike path runs along side the sidewalk or perhaps because there are a lot of students out and about.  Or maybe because the street is lined with shops, stores and local fast food places that all seem to be busy. This main street is nice and wide with pedestrians, cyclists and cars all sharing the space in, what I would say is, a controlled and respectful manner.

Slovenia is a tiny country of about 2 million people. Ljubljana, is the capital city, and has a population of about 280,000.   There are also 50,000 or so students in the city which most certainly adds to the feeling of being an active and alive place.   With the Ljubljanica River running through it, a medieval castle overlooking it and nestled beneath low-lying hills the city seems as one with its natural surroundings.

The historic city centre is totally pedestrian. The stuccoed buildings are painted in colors ranging from sunny yellows to deep ochre, from pinks to deep corals, spring greens to olive-green all create a feeling light and brightness on this overcast day.

The Franciscan Church is a deep coral with baroque curves. The St Nicholas and St Jacob church spires are tall and have onion domed tops. So immediately you are struck with how Austrian Ljubljana looks and how comfortably elegant it feels and little wonder since Ljubljana was part of the Hapsburg Empire for 700 years.

At the entrance to the historic city centre are the triple bridges.

The triple bridges are relatively new and are the design of the 20th century Slovenian architect Jože Plečnik.. He is credited with giving Ljubljana its modern identity.   He and two fellow architects were responsible for the urban renewal that took place after the earthquake of 1892.   Jože Plečnik brought his “Art Nouveau” style to the designs of the Ljubljana Open Air market, the Slovene National Library, parks, plazas, fountains, banks and even the city cemetery.   He also contributed to many civic improvement projects including renovations of the city’s bridges and the Ljubljanica river bank. The bridge railing is topped with round decorations that are evocative of the onion domed church spires.

You do feel that there is a sense of order to the streets and to the city layout. There are green spaces and

Trgs- Piazzas. There is also this real sense of functionality.

The market area has a long portico covered walkway and even in December with the temperature around 10C, people were sitting outside enjoying a coffee and sweet treat. The walkway is also lined with small booths selling everything from candles to blown glass to t-shirts.

The outdoor market had dozens and dozens of stalls overflowing with fruits and vegetables.

Again, it was colorful and vibrant.

Plus there were many additional stalls with all kinds of Christmas wreaths and flowers, and Christmas trees of all sizes.

The indoor market also seemed to very viable – small shops with everything from fresh meats and sausages, to walnuts, to cheeses, breads and pastries. I could not help myself and bought some kaymek – a rich, buttery, salty and scrumptious cheese.

Outside were high wooded tables and bar stool type chairs for the food stalls with the smells of sausages and kraut and smoked meats wafting in the air. All set against a background of the St Nicholas Church spires and it all made you want to just sit there and take in all the colors and scents and sights.

But we did move on passing the St Nicholas Church.  While the Church was built in 1701, the cupola was designed by Gregor Macek a local architect and was added to the structure in 1841. 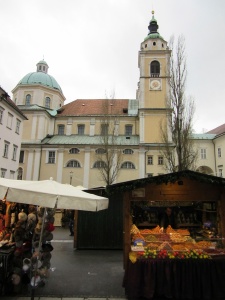 The City Hall was built in 1484 but Gregor Macek was responsible for the “renovations” that gave its current Baroque look.   Again, as with the Three Bridges, you can actually see the architectural evolution of the buildings. The City Hall is on the Mestni Trg- People’s Square – and the street still has a number of medieval houses.

In the square is – the Fountain of the Rivers –  with allegorical figures representing the Sava, Krka e Ljubljanica Rivers.   It is said to have been inspired by Bernini’s Fountain of the Four Rivers on Piazza Navona in Rome which for some reason was my favorite fountain in Rome  and I have a picture of it as my screen saver.

The street level is lined with shops and restaurants.

At the Stari Trg is huge Christmas Tree.  Every Trg  – Square has its own giant tree.  Slovenia still has alot of coniferous forests and its citizens are very outdoorsy with hiking being just about the most popular national pastime.  So  these huge trees  not only evoke the holiday spirit but are also somewhat symbolic of the Slovenian lifestyle.  Here there is also a giant tuque – again representative of the countries love of skiing with Tina Maze, an olympic gold medal winner.

We walked up the cobblestone streets to the Ljubljana castle. Again a great example of maintaining a historic space and giving it a new lease on life. The castle has a number of restaurants and museums and a great view of the city scape.

We walked back down through one of the trails in the park surrounding the castle and back to the river walk towards the Cobblers’ or Shoemakers’ Bridge. The bridge dates back to the 13th century, when it was a wooden bridge with a butcher’s shop on it. Story has it that the stench from meat was so strong that the king paid to have the meat shop removed, and its place was taken by shoemakers. Over the centuries, the bridge was reconstructed numerous times prompted by floods and fires until in 1931 it was replaced with the current stone bridge, designed by architect Jože Plečnik.

The river banks on both sides are lined with caffe’s and restaurants. And again lots of people out and about and sitting outside – lively and friendly. This being the holiday season, every one was offering up vin brule. The retail competition must be really strong as many were offering cards – buy 6 cups and get two free! Adding to the historic feel – two police men cantered down the street on horseback. 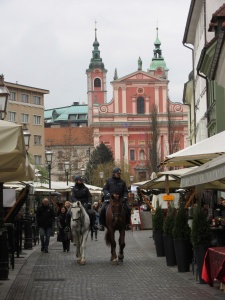 By this time we were in need of a coffee break. The café we went into was packed with people. By this time the sun had started to break through the clouds and we asked right away for a table outside. The table faced a large park and the sun felt nice and warm. The hot chocolate was rich and creamy and the chocolate cake was decadent. Does it get any better than this – sitting outside in December, surrounded by these beautiful historic buildings and in buona compagnia!

One thought on “Ljubljana in December”