The Gonzaga family took control of Mantua in the 14th century. Isabella d’Este, married Francesco II Gonzaga in 1490 when she was sixteen years old. She bore him seven children, including an heir (Federico Gonzaga II). This despite the fact that in 1502 the notorious Lucrezia Borgia, who was also Isabella’s sister-in-law, became the mistress of Francesco.

Isabella d’Este grew up in a cultured family in the city-state of Ferrara. She received a classical education and, as a girl, met many famous humanist scholars and artists. While her husband devoted his energies to military endeavors, she deployed culture and the arts as a way to expand the prestige of their small state. She became an important art patron of the Renaissance commissioning works from the most famous artists including Giovanni Bellini, Leonardo da Vinci, Michelangelo, Andrea Mantegna (court painter until 1506), Perugino, Raphael, Titian….

In 1509 Francesco, headed a coalition of military forces against the French, and was captured in battle by the forces of King Charles VIII of France. He was held in Venice as a prisoner. In his absence, Isabella served as regent, taking control of Mantua’s military forces successfully defending the city from their invaders. She negotiated a peace treaty that provided for her husband’s safe return in 1512. Francesco was freed on the condition that his son Federico be given as hostage to the Pope in Rome. Then from 1515 – 1517 Federico was sent to the French royal court of Francis I, still as a hostage to ensure Gonzaga co-operation after French victories in Italy.

After the death of her husband in 1519, Isabella ruled Mantua as regent until Federico came of age in 1521. She began to play an increasingly important role in Italian politics, steadily advancing Mantua’s position. She was instrumental in promoting Mantua to a Duchy, which was obtained by wise diplomatic use of her son’s marriage contracts. In 1531 Federico married Margaret Palaiologos and inherited her families land and titles. He had seven children with her.

Federico’s childhood was anything but peaceful – his father was a military man and often absent, his mother was a very strong and cultured woman, he was taken away from his home at a young age living in the courts of Popes and Kings. All this must surely have had some impact on his later life. I am not an art historian but it seems to me that it may also give some context to the building of and the art of the Palazzo del Te.

In 1521, Federico Gonzaga II was successful in luring an artist to Mantua — a star pupil of Raphael’s, whom Federico described as a “most noble genius both in painting and in architecture”, one Giulio Pippi, known as “the Roman-Romano”.

Federico wanted a country retreat, a place where he could meet with his mistress Isabella Boschetti. According to the Palazzo del Te’s official site, Vasari’s Lives of the Artists describes Federico’s charge to the architect: to “build a small residence to which he could retire sometimes to feast, or dine for pleasure”. Having escaped a Roman prison sentence for designing pornographic prints, Giulio Romano, was the perfect choice for the Palazzo del Te commission. Palazzo Te was to be his grand project in Mantua.

Frederico was a hands on Duke and for the decoration project Giulio Romano playfully followed the ideas and direction given by the Duke. Federico chose the place where the family used to keep their horses on the Isola del Te at what was then the outskirts of Renaissance Mantua.   Giulio Romano’s design, enclosed the old stables and created an extraordinary palace reminiscent of a Roman villa naturally blending in the green landscape of the surroundings. Palazzo del Te is a masterpiece of the “Mannerism” style of Giulio Romano. The work of building and decorating continued over the ten-year period between 1525 and 1535. Using the trompe l’oeil technique Giulio Romano left behind the cool classicism of the past in favor of wildly distorted perspectives, a pastel color palette and esoteric symbols.

While the story behind the building of the Palazzo most often refers to it is as a lover’s hideaway, it was far more than that. The Palazzo soon became the location for the court official receptions. The first half of the Palazzo celebrates Frederico’s private passions while the second half tells of his public virtues and political aspirations.

Frederico and Isabella Boschetti met in 1516 or so (there are some conflicting dates here as Federico was a hostage in France from 1515-1517) when they were both just sixteen years old. Isabella Boschetti was the daughter of a noble family. There is again conflicting information on this story but it is thought that Isabella had already been married for two years, and had given birth to at least one child when she met Federico. While it is not clear how the couple first met, the relationship between Boschetti and Federico proved to be passionate, long-lived, and a continued source of annoyance to his mother Isabella d’Este. Federico fathered two children with Isabelle Boschetti a daughter Emilia and a son Alessandro.

Already in September of 1516 Federico was celebrating his love for Boschetti by commissioning an impresa for her from Paride da Ceresara. In the letter accompanying the initial drawing of the impresa Ceresara writes that it “alludes to the name of the person for whom it was made”.

The Palazzo del Te has a room dedicated to impresse – La Camera delle Impresse. The top half of the room and the ceiling is covered with friezes of the impresse of the Gonzaga family. An impresa is a symbolic emblem made up of an image and a motto through which virtues, love, moral principles and important personal events are portrayed. The purpose of Renaissance impresse was to encode messages, mottoes and virtues so that visitors could “read” where loyalties lay and navigate political power structures.   They were also meant to stimulate discussion as to their “true” meaning.

The motto QUOD HUIC DEEST ME TORQUET, or

“What it lacks torments me”

refers to the salamander, a cold-blooded creature, which is not burned by the flames of passion which plague Federico. The impresa of the salamander identifies Federico with traditions of chivalric love and his passion for Isabella Boschetti.

Isabella Boschetti’s impresa depicts a leggy Cupid standing between two trees, one alive, the other dead, which Ceresara explains are a demonstration that “the life and death of the Lover depends on the Love of the “piccola boschaia.” This is a play on the Boschetti’s name which translates to “small forest”.  Frederico and Isabella are surrounded by impresse of the family showing that the two of them are an important part of the Gonzaga  dynasty.

The Sala dei Cavalli was designed as a room to receive guests and host the most important ceremonies.   What an amazing example of troupe l’oeil.  Noble and life-like some of the Gonzaga’s favorite horse are painted on the lower part of the walls. Federico, as his father and his predecessors, bred and cared for their horses in the famous Gonzaga stables, considering them the best gift to a friend or important guest. Two of the six horses still have their names written below: “Morel Favorito” and “Dario”. 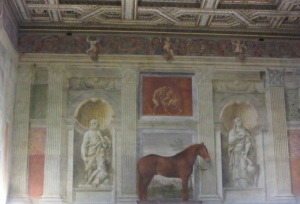 The horses stand out against landscapes painted in the background, and are surrounded by frescoed Corinthian pillars, niches with statues of divinities and busts of illustrious men and women and if that is not enough high above are friezes of comedic putti moving among colorful spirals, florals and masks.

In the Stanza del Sole the focus is a fresco with a chariot of the sun, driven by Apollo, sinking among the clouds at dusk, while the chariot of the moon, driven by Diana, is just beginning its journey across the sky. The allegory represents the continuous passing of time. It’s painted on the ceiling. You get a very unique perspective as you are looking up – right up the tunic of the chariot driver. Surprise, he’s not wearing underwear!

The fresco is surrounded by 192 white stucco reliefs on a celestial blue background all framed inside of lozenge-shaped white frames. The reliefs are incredibly detailed classical depictions of men, animals, including of course impresse of the green salamander and Mount Olympus, favorites of Federico II.

Frederico passed away at the young age of 40.

I was totally absorbed by this series of beautiful and dramatic rooms. Seeing this art in “context” on the walls of the Palazzo del Te, where Federico and Isabella and Giulio Romano planned and worked, made the art come alive for me. Having attended the lecture series, having an audio guide, the research I did on the web could of course not do justice to the complex stories being told. Just as my pictures could not do justice to the feeling I had of being drawn into the art that literally surrounded me from floor to ceiling.

Love and Jealousy at the Gonzaga Court: The Rivalry of Isabella d’Este and Isabella Boschetti by Maurizio Bernardelli Curuz