San Zeno and Enjoying the Fall Colors in Verona

San Zeno and Enjoying the Fall Colors in Verona

After a week of thick fog and cool rainy days the sun came out. It was a perfect fall day in Verona.

We were headed to the Basilica San Zeno.   The walkway along the Adige River was covered by a carpet of fallen leaves and overhead was a canopy of yellow from the tall deciduous trees. The sun reflected off the waters of the Adige and as we looked up river we could see all the way to the foothills of the Italian Alps. With the backdrop of a perfect blue sky, the pastel colored palazzi with their terracotta roofs seemed to literally bask in the golden autumn sunlight. 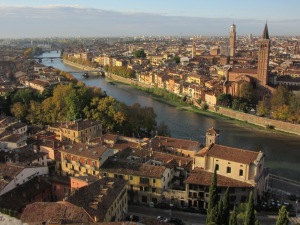 View of Verona and Adige River

We stopped to admire the medieval Castelvecchio. Built of red brick with a crenellated top running along the castle and bridge walls, it still retains a strong and imposing presence.   Lord Cangrande II della Scala had it built along with its bridge (the Ponte Scaligero) across the Adige River as a protection against attack from his powerful neighbors which included Venice, the Gonzaga and the Sforza families.

The Piazza San Zeno has a comfortable, neighbourhood feel. At one end is a small park.   The golden leaves of the tall trees seem to be exactly the same shade of yellow as the buildings across the street.     People are out strolling, talking to friends, walking their dogs, sitting on the park benches, just appreciating the sunny day. In one corner of the piazza customers are seated casually at outdoor tables covered with bright red tablecloths waiting for lunch at the osteria.

San Zeno is the patron saint of Verona. The Basilica of San Zeno was built between the 9th and 12th century and fills one side of the Piazza. Yet it does not dominate the Piazza. You do not have to know a lot about the technicalities of the architecture to appreciate its beauty.   It might have been the effect of the fall sunlight that gave the limestone façade a warm creamy-reddish glow but the church to me felt very inviting and human in scale.  Or perhaps it was the faces of the two lions sitting in front of the basilica, once bright red but now worn down with time, that also added to that inviting feeling.

Even though I started out saying that you don’t have to know a lot about the technicalities to appreciate the beauty of the façade, a little bit of context does add to the experience. The facade of St Zeno is considered one of the purest examples of Romanesque (medieval) architecture in Europe.

The entrance to the basilica appears quite modest. Up a few steps and you are on the small landing with the lions on each side. The lions represent justice and faith – and they are guarding the church so evil elements cannot enter. 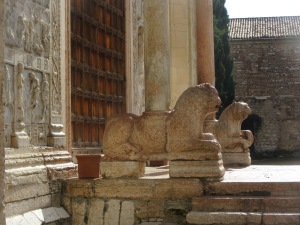 And then in front of you are the doors. But what doors – doors made of cast bronze. One door dates from the 11th century and the other from the 13th century. One of the first castings in bronze made since Roman times, they are decorated with 48 panels illustrating biblical stories and the lives of St. Michael and St. Zeno.

On both sides of the doors are marble reliefs. The marble bas-reliefs depict images from the Old Testament on one side and the New Testament on the other side as well as early medieval themes such as battles between knights and foot soldiers. These were meant to educate the illiterate church congregation on the Old and New Testaments and the life of San Zeno. 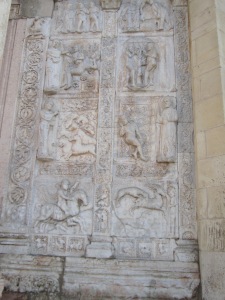 Above the doors of the church protected by a small roof is a relief of San Zeno stepping on a reptile like looking creature – this represents San Zeno stamping on the devil. On one side are portrayed the people of Verona, as was this was good politics at a time when Verona was a city-state.

In the centre of the façade is a stunning round window. It is an early example of a style element, a rose, an effect created by the mullions that look like petals. The rose would be very prominent in later Gothic church designs. This rose is known as the Ruota della Fortuna (Wheel of Fortune or Fate) because of the sculptures surrounding the window including a small relief of a Roman goddess the fickle Fortuna who it is said plays continually with the fate of man.

Standing back in the Piazza you can see that the church is perfectly framed on either side by two towers. The slim Romanesque campanile – bell tower – was begun in 1045 and completed in 1178. The wider red brick battlement tower to the left of the church is what remains of a 9th-century Benedictine monastery destroyed during the Napoleonic Wars.

It is quite awesome when you think about it – here I am on this beautiful fall day admiring this church in Verona that has seen people walking in and out of its doors for a thousand years.

San Zeno and the people of Verona

Enjoying the Fall colors in Verona

Walkway along the Adige River Verona

View of Verona and Adige River

View towards Campanile of Vescovado Duomo